New engineering faculty member Patrick Burnett has launched the Rocketry and Propulsion Society. The club received a $5,000 grant from BP in Ferndale, which will allow students to build their own rockets. Next year, the club aims for a competition where they will work as a team to design, build, and launch a rocket. As Pat says, “The really exciting opportunity for our students is the collaboration and mentoring with other schools, industries and organizations in the Pacific Northwest and beyond. The sky is not the limit for WCC’s Rocketry and Propulsion Society.” http://whatcom.edu/academics/academic-departments/engineering 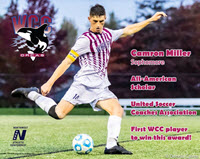 
Student Cam Miller was named to the 2018 Junior College Men’s Scholar All-American Team. This is the first time that a player from the Northwest Athletic Conference (NWAC) has been recognized. “Camron has displayed character, leadership, and is constantly putting others, the community, WCC, and the soccer program before himself,” said WCC men’s soccer coach Jason Jorgensen. Cam played a key role in the 2018 team that placed second in NWAC, and was the North Division Champ this fall. A sophomore, he is pursuing an associate in business degree. He transferred this quarter to Western Washington University. http://whatcom.edu/campus-life/orca-athletics

The WCC Foundation scholarship application for students is now open online at http://whatcom.edu/scholarships. By submitting their General Scholarship Application, students will automatically be considered for over $300,000 of opportunities. Applicants must include a letter of recommendation along with their application. A committee of reviewers from the college and community volunteers scores each application. Decisions on awards are announced in the spring. Please share this information with potential WCC students.

Why did you choose WCC? It felt like a great place to explore my passions while continuing to work toward a degree. It was a much more affordable option than jumping into a four-year university and I had heard great things from past students. I absolutely felt like I made the right decision in attending WCC. It had such a huge role in shaping who I am today.

Your future plans: I am currently finishing my last quarter toward a Bachelors of Science in Geology at Western Washington University (WWU). I’m currently applying to various internships related to geology and natural resource management, as well as to graduate schools. I hope to earn a Master’s of Environmental Science with a focus in energy systems at WWU beginning next fall. My primary career goals are to work in the alternative energy industry or in water resource management.

Favorite memory of WCC: I worked as a Student Ambassador in the Office of Student Life for a year, and it’s hard to pin it down to one favorite memory there. So I’d have to say all the tours I had the opportunity to give as an Ambassador! It was always such a fun experience to share information about what WCC has to offer and the Whatcom County community as a whole.

Favorite spot on campus? The Math Center. There were such helpful tutors and it was a really productive space to step into vulnerability while learning a difficult topic. The Math Center is a huge reason for why I was able to go so far in math and pursue a degree in geology.

And favorite professor? I can’t narrow it down to one! My favorite professors were Bernie Dougan and Dr. Kaatje Kraft in the Geology Department. They have been two of my biggest advocates and mentors throughout my entire undergraduate career. I’m so thankful I discovered my passion for geology at WCC.

Construction on Schedule for Self Learning Commons, Student Housing

The Phyllis and Charles Self Learning Commons will transform the campus. Concrete slabs on all levels are now complete, central stairs installed, as well as the roof decking and ongoing framing of exterior walls. Work also progresses on the student residence hall with much of the first floor framing completed, as well as electrical, mechanical, and plumbing. View from a drone courtesy of Colacurcio Brothers. 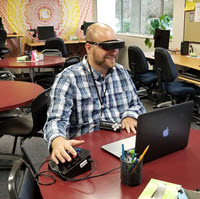 Former WCC trustee Tim Douglas led the state’s Association of College Trustees to create the Transforming Lives Award in 2012. Each community or technical college recognizes a student whose life has been transformed by pursuing higher education. This year, WCC trustees selected Steven Gnyp as our Transforming Lives nominee. He has struggled with impaired vision since birth. He credits Kerri Holferty, director of disability support services, for arranging accommodations for his visual disability when he entered WCC in fall 2015, and providing encouragement when he doubted his ability to reach his goals. He also credits Colleen McGoff, WCC instructor, with inspiring him to pursue a BA in communications. His long-term goal is to earn an MA in orientation and mobility. Steven’s work with the city Public Works Department resulted in eight audible crosswalks being installed in Bellingham, leading to his recognition as the WCC Outstanding Student Service awardee last year. https://www.sbctc.edu/about/college-trustees/transforming-lives.aspx

We are building futures together

Your gifts to students, faculty and staff, and college programs inspire us to do more. Dream bigger. Provide opportunity. Invest in our community. Join us!

WCC Foundation Board of Directors