Composition Discipline Outstanding Student Award: Brianna Poulos, nominated by English faculty Jeffrey Klausman. Brianna Poulos, Bri, has been an outstanding student in the English department generally and in her composition and rhetoric classes especially. Starting in English 101, she quickly distinguished herself as a savvy rhetorician, who, with her smile and wry wit, made her peers stronger through discussion and feedback. She studied African American rhetoric in a special honors-level class as one of only two students, ultimately focusing on the work of bell hooks, whom she was studying simultaneously in Advanced Composition, and coming to demonstrate how race and gender and language-use can never fully be separated. This was upper-division work. A Spanish speaker, Bri continues to quietly promote social justice in her work in the Writing Center as a peer-reader, where she has developed into a leader. Bri’s going to have a great career at Western and beyond and, if we’re lucky, maybe she’ll come back here to Whatcom to teach for us. 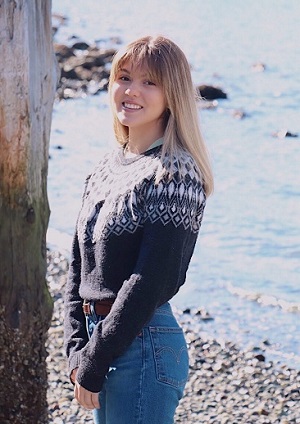