Literature Discipline Outstanding Student Award: Blayze Kiefer-VanderYacht, nominated by English faculty Sue Lonac. Blayze Kiefer-VanderYacht (they/them) was in my LGBTQ+ Literature honors seminar in Winter Quarter. Though they initially had some trepidation about writing about literature, they quickly demonstrated exceptional skills with literary analysis, as well as superb writing skills. They were consistently engaged with the works we studied and always made meaningful contributions to class discussions. They demonstrated great insight and a capacity for empathy with the characters that’s essential for understanding imaginative literature. Finally, they revealed a mature understanding of queer theory that allowed them to think adventurously about the literary works we examined. I was extremely impressed and believe that Blayze is highly deserving of this award. 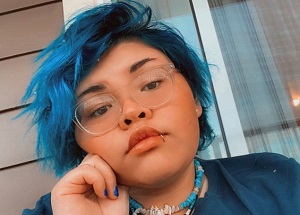